It sparked these memories

I just finished reading a fictional story in which a husband brought his wife roses....just because.
Hard to imagine?
He wanted to show her that he loved her and that he recognized all that she did daily.
If I had read this about 15 years ago my response would have been....Ha! Fat chance.

Back in the late 80's when Keith and I married.....I had a husband that was clueless.....and I believe he would admit that he didn't want it any other way.
He was raised basically as an only child since his brother and sister were around 18 and 19 when he was born. Yes, he was a forty something baby.
And since his parents retired by the time he was 10.....life was all about him.
His parents were at every game he played....this continued through college when he went to school in Minnesota. His parents would pack up the camper during football season and make the trip from Louisiana. Keith's mom would cheer from the side lines and then feed the guys after the game.
Yes, he was a tad pampered.
We met at a singles Bible study when he was in his mid 20's and still living at home.
I loved his mom and dad.........they were really all about family. His mom had a huge heart.
After Keith and I had been dating for awhile they told me that if Keith did not marry me....they would. :)
Keith and I did finally marry after about 2 1/2 years of dating and engagement.
I wonder if I would have gone there if I had known the rough ride that would follow? Truthfully...probably not.
We married in November, and then moved in with his dad after his mom passed away two months after we were married. And by August we had added a child to the mix.....two weeks after that child was born Keith lost his job. Whew!
Honeymoon period.......what's that?! ;)

I can not even begin to explain how excruciating these first several years of marriage were. There was no romance and certainly no spiritual intimacy. Talk about popping dreams!
All of the details finally led to a separation that lasted about a year and a half. This separation saved our marriage.
During this time God worked on my heart and I invited Him to step in and change my heart.
Did things change right away? No. But now I was in this for the long haul....come hell or high water. LOL.....both of which I felt like I walked through.
And, I am sure Keith would tell you the same.
I am in no way guiltless in what led to our rough years. But often God grabs a woman's heart first....and that is what happened in our marriage.
I began to let God change me......and tried as best as I could to keep my mouth shut and let God work on my husband. I know I gave Him a really hard time.....my mouth is not given to silence.

It took awhile for God to heal my battered heart. I didn't feel very loving toward my husband and I know it showed. But as I allowed God to fill my heart with His love....that love started to spill over onto Keith. The grrrrrr that had ruled my heart for so long began to diminish.
And one day......the changes that God had been making in my husband heart....it began to show.
I began to see a sacrificial nature begin to show up. It would come and go.....and God really held my heart during those times. It is really easy to let bitterness set in during these times of change. Sometimes you can feel like you are being used.
But God knew what He was doing....and eventually my respect for my husband began to grow.
Not that I have arrived.....God is still working on me in this area.

About 6 months ago Keith began to pray that God would teach Him to love me as Christ loves the church. I was a bit skeptical about what that would look like at first. I mean Keith had already changed so much....not yet having arrived at perfection....but oh so much better.
One thing that did change was that I began to see him take a real interest in leading our family in a spiritual way. This is still something that I am getting used to.....because I felt for years that I was the leader in this area.
Just recently we have started getting up with each other in the morning so that we can pray together before we have our own separate devotions.
This is a story that has been almost 21 years in the making.

I am not sure why I am sharing this.....but God has a plan.
Satan thought he would win in the destroying of our marriage.....but he didn't.
Don't give up hope. Keep praying for your husband and marriage.
I have not "arrived".....I will keep praying for my marriage and my husband.
And for those of you have asked me to pray for you and your marriage....know that God and I talked about you this morning.
Don't give up hope.

23" 'If you can'?" said Jesus. "Everything is possible for him who believes."

24Immediately the boy's father exclaimed, "I do believe; help me overcome my unbelief!" 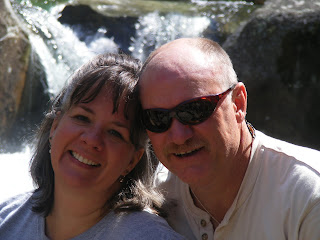 Posted by Sharon Brumfield at 6:58 AM

Praying God's sweetest blessings be upon you and Keith. I love you.

Sharon, thank you for sharing that part of your live...God is the only way to a truly happy marriage...you are so blessed to have a Christian husband....I'm still waiting.

Hugs to you, my friend.

What a great testimony! This is not talked about openly enough in Christian circles- thanks for sharing!

What a great encouraging story! In several ways it reminded me of my journey where I have learned the secret to a great marriage - the wife and husband individually cultivating intimacy with God - daily and one-on-one in His Word. Because then as you said over time God's truth, wisdom, mercy, forgivness and love start to fill your soul and pour out into the lives of those around you.

My husband and I never "worked on our marriage" - we spent that quiet time with God and as His presence filled more and more of our lives - it changed everything.

Thanks for sharing your heart!! God is amazing how He mends two hearts and souls....love you

I just wanted to let you know that this post has been on my heart since I read it. I had already been working on keeping my mouth shut and letting God work, but since I read your post I have been working even harder. And I keep thinking that you said you didn't know why you were sharing it- but I know one reason was for me- I needed very much to read this.