Well, I told ya'll I go to a small church--here is the evidence.
We might be small ------but we are mighty in heart.
This weekend was a full one at our little church. Friday night we had Fall Fest and a lockin for the teens. Yes, it was an all night affair.
And no, I was not there- this old lady was home in bed. :)
The next night we had a bluegrass band from Alabama come to lift the roof. They are called the Muleskinners. They were incredible! I am not much for the country music stuff-but this was great. I love the way there voices worked together and they could play some music. 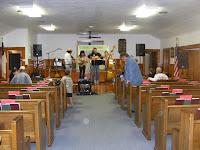 The band is made up of two married couples. The two on the ends are married and the two in the middle are married. The women did not play instruments before they came up with the idea for the group. The men had done some singing together at their church. I'll say that is pretty great of the women to take up something for their men. The little one on the right was a match for that huge bass though. Before the concert we were talking to her and when she said she was the bass-Keith thought she was the bass singer. We had a good laugh. 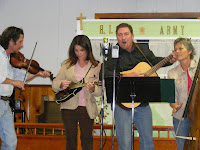 Keith just had to have a picture of us all enjoying the music. Yes, that is me sitting down next to the guy in the orange shirt on the left of the church. Notice one of the guys on the right with a big gray beard? We had a Christian biker ministry that came in for the concert also. They have huge hearts for God and use their bikes and leathers to reach people for God. They stayed over for the service Sunday and we were blessed by their testimonies. 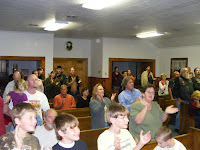 After the concert and fellowship time Keith came and got me from the back and said he wanted to introduce me to someone. When we got out front he began to introduce me to one of the groups members. I told him I had already been introduced-but he stopped me in mid sentence.
He said, No you don't understand. This guys brother and I were best friends when I went to school in Colin, Mississippi years ago. (over 25 years I believe) Not only that, but this guy and I double dated while I was there.
Is that wild or what?
He now lives in Alabama with his wife and children. If it had not been for Robert going to the place in Alabama where he met the group-there would have been no reunion.
From Mississippi, to Alabama and back to Louisiana.
God is cool! 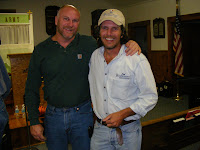 Posted by Sharon Brumfield at 9:48 AM

Sounds like a good time was had by all. Church get-togethers are always fun.

Thanks for stopping by my blog and commenting on the post about my husband hitting the deer. We have a rented van, paid for by the insurance company right now. We won't know whether or not the van is a write-off for a couple of days.

Take care and blessings for the coming week.

How neat to share with each other about our church going. Now, depending on (yes I know this is bad) which leg (yes one foot is still in one church and the other foot in the other one) of mine you are referring to...my church is as small too and I LOVE it!!
Thanks for sharing!

This sounds like an amazing time! When I was growing up I went to a small church. Now I attend a very large church and lately I have been missing that small church family feeling.